ColorOfChange members have pressured Coca-Cola to #DumpTrump! But the fight isn't over yet.

Huge news! Because of pressure from ColorOfChange members like you, The New York Times is reporting that Coca-Cola will no longer provide financial support to Trump and the Republican National Convention (RNC)!1

Thanks to the pressure generated by the more than 124,000 of you, Coca-Cola has declined to match the $660,000 it provided to the Republican convention in 2012. It's clear that your voices have the power to shift the decision-making of major corporations and the problematic politicians they support.

While Coke's decision to not make further monetary contributions is important, Coke and other corporations need to demand refunds of contributions they've already made, refuse to fulfill prior pledges of support, and make sure their products and brands are nowhere to be seen at the convention or during coverage of the convention. We will continue to hold Coke accountable for any association or promotion of Coke products during the Trump-led RNC, but their decision to cut funding is a huge change in momentum.

Coca-Cola is just the first domino to fall in the campaign to get corporate sponsors to divest from hate. And The New York Times is reporting that other major corporate sponsors are growing even more nervous about sponsoring Trump and the RNC. We need to seize this moment and push other wavering companies to join Coke in immediately terminating their plans to sponsor Trump and the RNC.

Demand the remaining corporate funders of Trump and the RNC follow Coke's lead and immediately terminate their sponsorships!

Until Justice is Real,

--Rashad, Arisha, Brandi, Evan and the rest of the team at ColorOfChange.

Donald Trump is all but certain to be the Republican presidential nominee this summer. And corporate sponsors like Coca-Cola are planning to fund his coronation at the Republican National Convention (RNC).

Even with Trump refusing to disavow the support of the Ku Klux Klan this weekend and declaring "All Lives Matter" at a rally, Coca-Cola still has not canceled their sponsorship of the RNC.3 4 How can Coca-Cola, a company that heavily markets to and profits from Black people, fund a platform for a presidential nominee that is being bolstered into office by former Grand Wizard David Duke, the KKK, and other white supremacists?

Coca-Cola is stuck pretending that their sponsorship won't provide a platform for Trump's dehumanizing hate speech. But when corporate dollars are used to fund a platform for a demagogue who promotes a violently anti-Black message, that company is just as culpable as the person shouting.

Will you call on Coca-Cola and other sponsoring companies to end their sponsorships of a Trump-led convention?

Coca-Cola, like many of the companies sponsoring the RNC, claims to be a champion of diversity and has run multi-million dollar marketing campaigns to convince the public of that claim.5 If Coca-Cola wants to maintain its image as a diverse and inclusive company, then it can in no way fund a platform for Donald Trump.

Trump's violent political rhetoric has very real consequences for Black people.6 His use of violent rhetoric, racially charged imagery, and paranoid conspiracy theories dehumanizes Black Americans and encourages hate crimes, white terrorist attacks, and daily violence against Black Americans. It's even inspiring a rise in membership for white supremacist groups and causing a huge spike in the number of white terror militia groups.7 8 If Coca-Cola funds a Trump-led RNC, they will be funding all of Trump's damaging messages.

In a letter to ColorOfChange, Coca-Cola executives said they have a "civic responsibility" to support a Trump-led RNC to "encourage more Americans to participate in the political process." If Coca-Cola truly believes in corporate civic responsibility, than funding a platform for an anti-democratic demagogue preaching violently anti-Black, anti-Latino, anti-Muslim, and anti-women bigotry should be the last thing they would ever want to sponsor.

Coca-Cola and other RNC sponsors like Xerox, Adobe, Cisco, AT&T, and Google think their sponsorships are neutral but, they are not. These companies have a choice. They can either demonstrate real civic responsibility and stand against Donald Trump's bigotry, or they can throw away their multi-million dollar diversity marketing campaigns.

Will you demand these companies stand against Donald Trump?

Help support our work. ColorOfChange.org is powered by YOU—your energy and dollars. We take no money from lobbyists or large corporations that don't share our values, and our tiny staff ensures your contributions go a long way.

ColorOfChange is building a movement to elevate the voices of Black folks and our allies, and win real social and political change. Help keep our movement strong.

Posted by SANKOFA at 9:04 AM No comments: 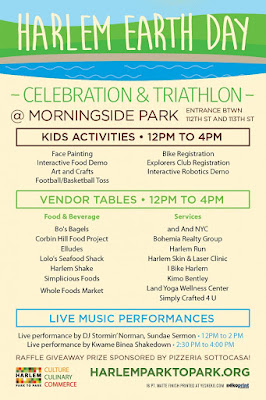 Posted by SANKOFA at 5:14 PM No comments:


Notification issued 3/28/16 at 12:00 PM. The National Weather Service has issued a Wind Advisory for NYC which is in effect from 5:00 PM 3/28 to 6:00 PM on Tuesday, 3/29. The advisory has been issued for sustained winds of 20-30 MPH with gusts up to 50 MPH possible. During periods of high winds, residents should use caution when walking or driving high profile vehicles. Winds at these speeds can cause flying debris, turn unsecured objects into projectiles, and cause power outages. To prepare, charge cell phone batteries, gather supplies, and turn refrigerators and freezers to a colder setting. Always stay clear of downed power lines. If you are affected by an outage, turn off all appliances and keep refrigerator and freezer doors closed to prevent food spoilage. Do not use generators indoors. If you lose power and have a disability or access needs, or use Life Sustaining Equipment (LSE) and need immediate assistance, please dial 9-1-1. For the latest weather information visit www.weather.gov/nyc.

Posted by SANKOFA at 8:20 PM No comments: